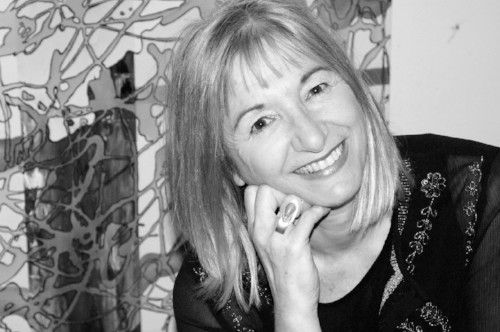 Blandine Saint-Oyant is an artist who was trained in the US and has been living and working in Los Angeles for many years. She is an abstract painter and accomplished colorist who works with poured paint. Her work explores the relationships between fluidity and control, spontaneity and structure, exuberance and calm, resulting in intriguing abstract improvisation. Her work has been shown in different venues in southern California and in France.

ARTIST STATEMENT
I am an artist who was trained in the United States and have been living and  working as a painter in Pasadena for many years. I am a contemporary abstract painter and a colorist who works with oil. I have developed a distinctive painting process that uses liquid oil paint poured against a background prepared on canvas or paper.

My work explores the relationship between fluidity and control, spontaneity and structure, calmness and exuberance. My process employs liquid oil paint poured on the surface of the canvas. When the different batches of colored paint are poured and the canvas rotated back and forth, the pigments intermingle and fuse into visually striking patterns and shapes. After many years of painting practice, my process remains largely experimental and improvisational. My aim is to create a space in which contrasting elements are interwoven into organic and fluid compositions. I see these paintings as “ intuitive landscapes”, many of which suggest fictional natural phenomena (cloud formations, stormy skies, cascades, patterns of moving water, minerals). They are about a world in a perpetual state of transformation, an unfolding elegant chaos of energies, a moving buoyant magma of colors and forms frozen into art – a painting.