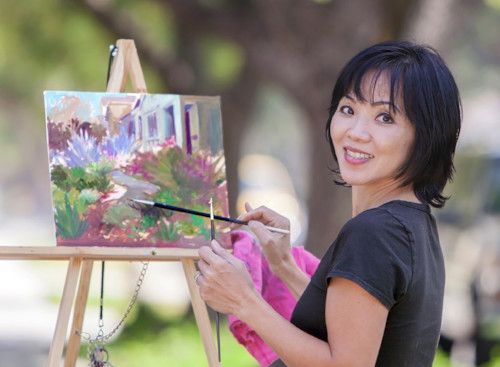 Mina Ho Ferrante is also known as Hồ Mộng Nhã Uyển in her native country of Vietnam, where she lived until she was 21. Before moving to the United States, she had a solo exhibition of silk paintings at the Fine Art Association of Ho Chi Minh city. The city’s daily news then named her “Vietnam’s youngest solo exhibition artist.”

In America, Mina attended The Academy of Art College, San Francisco. During the third year, she was one of the 35 students recruited from 13 top art colleges in America and Canada to attend Walt Disney’s Animation Training Boot Camp. Upon completing the “Boot Camp,” Mina was one of the three students who received a scholarship and a post graduation offer to work for Disney Feature Animation Studios.

Mina is an active member in numerous art organizations and is continually involved in state-wide exhibitions across California, earning many awards with her expressive and lively paintings.

Mina now lives in Burbank, California with her husband and three children. When not taking care of her family and painting, she volunteers in the community and writes. Mina also teaches drawing and painting classes for both adults and children. In January 2016, she had her first book published. It’s a bilingual fiction titled “Prince of the Sea,” which she wrote and illustrated.

I'm an artist and mother of three bright and loving children. Being a full-time mother and a passionate artist is not an easy task.

I also like to volunteer for our community, sharing and utilizing my artistic skills. Balancing my family, community volunteer work and keeping my creative fire alive is an art in itself.

I came from a poor country where art is a luxury and out of reach to common people. I grew up in war and post-war time in Vietnam. As a young child, I experienced a life of poverty and starvation, full of near-death catastrophe exposure, and lack of freedom. Now living in this wonderful country, I realize that I have received so much from it, and I also have so much to offer back to others.

As my children grow, my love for life is maturing too.

However, the process of personal growth and artistic maturation is not painless. Nevertheless, I have learned that within my ability, everyday, I can always make a small difference in the world I’m living in, one bit at a time.