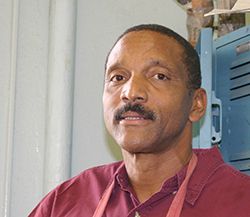 Biographical Information:
From childhood to my mid twenties I created Art because to me it was the easiest way for me to ingratiate myself towards people. I was unbelievably shy and withdrawn. If I spoke to a stranger I became nervous and often stuttered. However today that is no longer the case and that is not why I am an Artist. It was during the Vietnam War and the protest movement (I was in my early twenties) that I became self assured and took Art seriously; I found my style. Although I was trained as a Commercial Artist at L.A. Trade Technical College I later became more comfortable as a studio artist - it wasn’t restrictive. I received a B.A., M.A., and a Standard Secondary Teaching Credential from California State University Los Angeles. I painted, drew, sculpted, and printed religiously. I even had my own T-shirt screen printing business until the IRS spooked me. I lived and breathed Art, then it all stopped! …..Why? Because like Marcel Duchamp ( who basically created Art then went off and played chess) I discovered I was good at playing tennis! On the Tennis court I didn’t have to deal with politics, transporting work, taking it down, and storing it - all you had to do is show up and try to beat your opponent. You had an audience, and sometimes a gala, banquet, and you won money and a trophy on occasion. I was hooked! I had people telling me how good I was, I made new friends, it was like night and day from what I was as a kid growing up. I went full bananas into tennis. Tennis , however, took it’s toll physically. I am now a retired Art teacher of 37 years with the L.A. Unified School District. During that time I taught High School and Adult School.
Today I am an Artist because I want to make a statement regarding subjects that have a profound impact on me. When I was in high school art class our teacher suggested we take our sketch books and capture the Watts Riots. Today that would be something I’d enjoy doing with a camera. To me, making Art in some ways is like teaching Art. When I was teaching, I couldn’t wait to get to the classroom. I had 2 storerooms, and I sometimes slept in one on Saturdays. Similarly, I will awake in the middle of the night and jot something down about a painting I’m working on so I don’t forget. When you’re doing something you love it's not working. In college I was strongly influenced by the “Photo-Realist” movement and have continued in the realist style. My subjects are varied i.e., traditional still lifes, portraiture, figures, and landscapes. However, and most importantly, the subjects must elicit an aesthetic experience within me. To me an aesthetic experience is not an ordinary experience but a unique experience. It entails an emotional involvement within me towards the subject matter - I can have feelings of euphoria, detestment, or compassion. Therefore, I could just as easily work on a portrait of President Trump as I could a waste dump or a landscape of downtown Skid Row with homeless people about. To me those are examples of controversial subjects that impact me. I am experienced in watercolor, pen & ink, pencil, pastels, charcoal, but am most comfortable in oils and pencil.
The 3 pieces I’ve submitted: Gorilla, President Obama, and Monarch Butterfly all carry an emotional attachment. I’ve loved Gorillas, ever since I was a child. I used to go outside and draw them very big in the dirt - I can’t watch the end of King Kong. President Obama came to the school I worked at when he was running for president, and I shook his hand. I was the yearbook coordinator there and I took his picture and put it in the yearbook, plus he lived in Pasadena for awhile when he was going to college. The insect I love the most is the Monarch Butterfly- I love its wings.The Artists that I have been impressed the most by are Wade Reynolds, Mel Ramos, and Chuck Close.