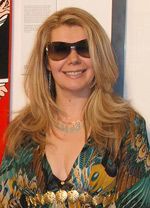 Biographical Information:
Lore Eckelberry is an international contemporary artist located in Los Angeles, California. Her paintings are featured in galleries and private collections throughout the United States, Japan, England, Germany, Spain, Korea, Hawaii, Canada, Mexico, as well as a contemporary museum in Japan.

Her love of travel and her curiosity about other cultures led her to visit Canada, Japan, China, Korea, France, Holland, and Italy (where she lived for some time). Lore is a self-taught artist and her style went from early 20th century inspiration into totally contemporary work. Lore's spontaneous, explosive paintings exude the artist's love of expression of strong emotions. Lore's emphasis on color creates a strong and completely modern and innovative way of expressing art.

I strongly believe that the soul of a man can be reflected and recorded in art.

I like to convey an emotion that comes directly from the subject I am painting.
It is not my intention to create a mirror image of the person nor their sex, nor likeness.
What I want is to give a sense of feeling and emotion throughout the color and form of my art.

I love to travel! I am very interested in other countries and cultures. People, colors, traditions, religion, and landscape fascinate me. It is the sensation of the emotion that I perceive in a culture or the people around me that I wish to communicate in my paintings.

I love people and animals. It is the love and admiration that I have for them that inspires me to keep on painting.