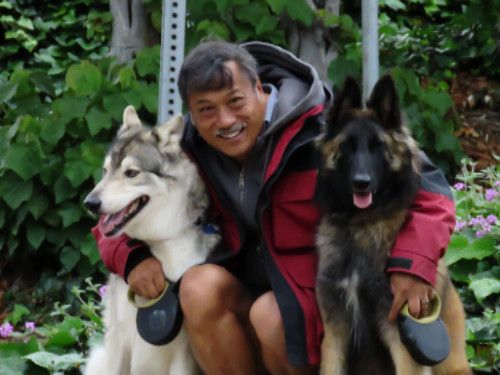 Biographical Information:
My paintings are created using acrylic spray enamel on the obverse side of clear co-polyester panels - PETG. They are "obverse" paintings, rather than "reverse" paintings, in that they are not the product of a backward, formulaic process, but rather the result of a creative "dialogue," action answered by a strategic, intuitive reaction, generated to be viewed through the clear surface. Working from behind is not the equivalent of working in reverse.

Using water, static, objects (found or created -to mask or print), and other masks and influences, I determine shapes and textures, building the paintings, color layer by color layer, overlaying textures and hues. I also use sgrafitto and solvents to clear and repaint areas or to manipulate the laying-on of colors in acrylic and other media, including collage, oil-pastel, and metallic dust. In fact, the optical qualities of the polymer, through which my work is viewed, become an additional "medium" in the finished work.

Each painting is unique - unrepeatable, by virtue of the technique. After completion, the paintings are annealed, giving the surface a "fingerprint," a final mark of distinction. Some paintings are coated with a thin film of polyurethane to protect the surface.

As with all pigmented fine art, these paintings should be sheltered from direct sunlight, impact, and excessive heat.

Artist Statement:
My paintings result from a progressive dialogue, between stages of strategy, analysis, and intuitive choices. The results are viewed through the clear surface of my "canvas." I do not paint backward ... but I do paint on the back side, building, layer by layer, to a conclusion. My unique, indirect, painting process incorporates the thin, polymer panel to create the luminous visual qualities of copper enamel, art glass, or glazed tile, but with the added spontaneity and scale that painting allows.

I discovered my painting technique in an exploration of the visual properties of art glass with the objective of engaging the flexibility and spontaneity of painting. The bonus was that my new process, working on the back side of a thin, clear panel, forced me to relinquish a generous amount of control. This twist allows me to rely on my intuitive resources, injecting surprise into the process of creation.