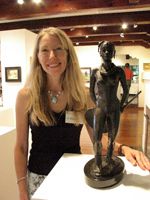 Biographical Information:
Jill Blaisdell was raised in Wilmette Illinois, a suburb just north of Chicago.
Growing up two blocks from Lake Michigan greatly influenced the artist's perception of the physical world. Lake Michigan and its many moods were full of fast changing images and strong elements of wind, ice, sun and waves.

The Art Institute of Chicago also provided a strong guiding force in her early years. Frequent trips to the Art Institute introduced this artist to ancient Greek sculptures, French Impressionists, etc. and encouraged her passion for the arts. The pair of Lions guarding the Art Museum set a high standard for what sculpture could be. The strength, and durability of the bronze statues made a lasting impression. While in High School Jill's art teacher encouraged her to submit several prints to a student art exhibit. One of Jill's prints won first prize and the jurors awarded her a scholarship to attend Life drawing and printmaking classes at the Art Institute.

Jill moved to the West Coast in 1978 to attend Art Center College of Design, as a film major with a minor in illustration. After a career of working as a sound effects editor in the the Motion Picture Industry, Jill now lives in the Southern California foothills with her family, sculpting full time.

Artist Statement:
Nature is my most critical ally. It inspires me endlessly, it helps me get lost in the moment, it focuses my mind, it's light emphasizes the forms I see. My natural instinct is to work in a figurative style because the human form is most familiar, and it is a direct way to express my emotions. I choose to sculpt in bronze and stone because these materials are beautiful and timeless, and they allow me to experience the world in a tactile/visual way.

There have been many artists whose work has inspired me artistically: Michelangelo, Bernini, Canova, Jean-Antoine Houdon, Aristide Maillol, and Henry Moore to name a few. From studying these artists' work they have shown me the aesthetics of harmony and balance in nature. They have taught me to search for truth and interconnections in the forms and to retain the essential details. Sculpting women allows me to explore who I am, and to explore what the modern version of "Venus" would look like.

I believe Art has the power to heal the subconscious and to energize the spirit. I like art that tells a story and has movement, so I constantly question if the piece is conversing with me. I work hard to coax an expression out of the grease clay and feel the difference between a well-executed study and a successful piece of art is the impact it has on the viewer. Is it inspiring, does it make you feel something? I would like to think my art is uplifting to my viewers.